Mature student confronts fears to graduate with Masters in Law 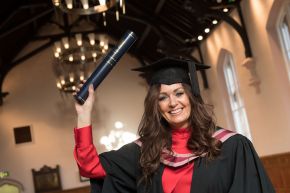 Julie Smyth-Leddy, a mum of five and budding businesswoman from Derry~Londonderry is set to graduate with a Masters in Law at Ulster University’s Belfast Campus this December, as she reminisces about the obstacles she overcame to get there.

With an undergraduate degree and a real passion for Law, the bespoke jewelled bouquet owner was training as a Transformational Life Coach when she decided the best way to encourage clients to pursue goals and chase their dreams was through leading by example and taking positive action herself.

“The reason I chose to study a Law Masters was largely due to my primary degree being in Law. I studied Law when I first left school at the age of 18 but life took me off in different directions.  Part of the impetus to study this course was prompted by my life journey and the desire to understand more about the areas relating to access to justice.”

Exploring various career paths such as journalism and self-employment, Julie claims that her main motivation for beginning the course was her children:

“I had the good fortune of having five children, becoming a single parent when my eldest was 11 and my youngest 3. The necessity to provide for my children resulted in the founding of my craft business, designing bespoke jewelled bouquets which is still operating today. However, as my children matured and started to head off to university, I felt drawn to returning to education and wanted to be a role model for them.”

After being awarded a scholarship by Allen and Overy, Julie thought it was the perfect time to pursue her goals and chase her dreams, however it was not without its doubts:

“It was incredibly daunting at first and I was challenged not only by my initial fears but by the need to effectively manage time with travel also proving quite difficult. However, the course lecturers were incredibly encouraging, as were my children and my fellow students who were a lovely bunch of people, and are now very good friends.”

Specialising in domestic violence, the Derry~Londonderry native was presented with the opportunity to become involved with a pilot programme at Ulster University.

Julie spoke about her highlights at Ulster University:

“I have had many highlights. My learning has been extensive throughout this course and I have overcome so many personal hurdles and fears. But my greatest highlight has most definitely been the people. I have had the privilege of meeting wonderful lecturers who avidly advocate for access to justice, lovely clients who deserve an easier route to accessing justice and amazing fellow students who I now count amongst my best friends.”

With big plans after graduation, Julie is looking ahead to building a life-coaching business and wishes to combine her legal background with her passion for people:

“I have set up a life coaching business called Rise Transformational Coaching and it is my hope to support others in the pursuit of their dreams. Beyond this, my wish is to combine my legal background with my coaching and support those particularly impacted by domestic violence - to know that they can move beyond adversity to strength and transform their life.”