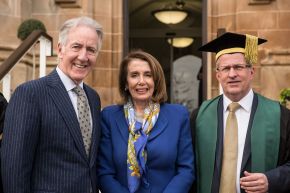 Congressman Richard Neal has been awarded an Honorary Degree of Doctor of Laws by Ulster University for his outstanding contribution to peace and conflict resolution across the island of Ireland and for profiling Irish concerns throughout his Congressional career.

The degree was conferred upon him by Vice-Chancellor and President of Ulster University, Professor Paddy Nixon at a ceremony attended by Speaker of the United States House of Representatives, Nancy Pelosi. As a supporter of the University’s John Hume and Thomas P O’Neill Chair in Peace at the Magee campus and its work since 2015, Congressman Neal addressed students and staff to announce the development of Ulster University’s Hume O’Neill Washington Lecture Series, an annual lecture by an internationally-renowned conflict resolution expert, the first of which will be held during the St Patrick’s Day celebrations in Washington in 2020.

“Congressman Richard Neal is today recognised and honoured by the university community for his work as a champion of inclusivity, peace and prosperity across the island of Ireland.

Congressman Neal’s maternal grandparents were from Northern Ireland and throughout his political career he has remained a steadfast and unwavering supporter of peace building efforts here. He was an early supporter of the establishment of the John Hume and Thomas P O’Neill Chair in Peace and has today launched the Ulster University Hume O’Neill Washington Lecture Series as he continues to support the university’s expertise in peace and conflict resolution.”

“With my remarks in the Great Hall today I join a very distinguished group of speakers who have been asked to participate in the Tip O’Neill Lecture Series. It is with no small amount of humility that I accept this honorary degree of Doctor of Laws from Ulster University and I accept in honour of my grandmother, Mary Ward who was born in County Down.

The Ulster University Hume O’Neill Washington Lecture Series launched today will connect with local and global peace and conflict experts to further develop expertise in conflict resolution and will be complemented by related activity at the Magee campus."