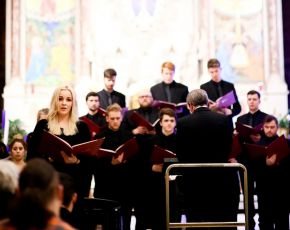 Ulster University Chamber Choir are heading to New York for a performance in Carnegie Hall titled ‘The Great War: Commemorating 60 years’.  Esteemed composer Paul Mealor will conduct ‘Requiem: The Souls of the Righteous’ and Patrick Hawes the ‘The Great War Symphony’ on the 11th of November in their United States debut.  Principal soloist of the Ulster University Chamber Choir and final year Music student, Kerry Stamp has been chosen for a prestigious solo in Mealor’s Requiem.

The Ulster University Chamber Choir will join a global ensemble of around 230 singers who will perform together in one of the world’s most prestigious venues, Carnegie Hall. The venue has seen performances from the most celebrated musicians of all time from Pop Culture influencers like The Beatles and Miles Davis to renowned composers and conductors.

Paul Mealor’s Requiem was composed to mark the centenary of the end the First World War. His work has reached critical acclaim with Mealor also being famously chosen to provide ceremonial music for the wedding of The Duke and Duchess of Cambridge. The Remembrance Day production is organised by the Distinguished Concerts International New York (DCINY), distinguished for their world-class music productions.

DCINY called on Choral Directors to put forward soloists to audition to be the soprano soloist for Requiem. Ulster University Choral Director Dr Shaun Ryan put Kerry Stamp forward, who with the help of Choir Organist Stewart Smith produced an audition recording to send to New York. Out of the all of the choralists who auditioned, Kerry Stamp was chosen by Paul Mealor and the DCINY panel.

Kerry Stamp, hailing from Carndonagh in Donegal, has had an impressive performance history which includes performing as a soloist in front of President Bill Clinton and President Mary McAleese. Kerry also performed the soprano solo for Charles Villiers Stanford piece, Fairy Day which was recorded with The Ulster Orchestra and will be released in 2019. Stamp has been a member of the Ulster University Chamber Choir for the past five years, a choir that is acclaimed for their vocal excellence.

“This is an amazing opportunity for the Ulster University Chamber Choir to perform with world-renowned composer and conductor, Paul Mealor and take the stage at the prestigious Carnegie Hall for a very special concert commemorating the centenary of the end of World War I. Our choral scholars are fully committed to choral activity at Ulster University and their dedication to the rehearsal process has resulted in critically acclaimed performances at venues through Ireland, the UK and beyond throughout the last two decades.

Kerry Stamp is one of our principal soloists and we’re delighted at her success in being chosen as the soprano soloist for the Carnegie Hall performance of Mealor's Requiem. She is a brilliant ambassador for the Choir, the University and Northern Ireland, and her success is a great example of the opportunities of which our students can avail and the heights that they can reach.”

“To be on the very stage that Rachmaninoff and Gershwin frequented is just incredible! To stand up there as a soloist is an experience that, until now, I could only have dreamed of. I am so grateful to Paul Mealor for this fantastic opportunity.

As the concert date nears, the excitement is really building within the choir. We are all so proud to represent the University and especially our conductor, Shaun Ryan who, without doubt, is the reason we are a Carnegie Hall standard choir."