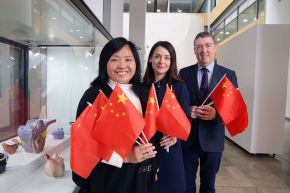 Ulster University has announced an expansion of its strategic partnership with one of China’s top tier universities.

The new agreement with Dongbei University of Finance and Economics (DUFE) will facilitate collaborative research activity in business and foster increased staff exchange between the institutions. Additionally, there will be new opportunities in the area of joint course development and for students from Ulster University Business School to study in China.

DUFE’s Finance and Accounting courses are ranked in the top 10 in the whole of China, a country which has almost 3,000 universities.  The university is based in the city of Dalian in Liaoning province, near the Korea peninsula. The city is a major financial, shipping and logistics centre for north-eastern Asia.

This builds upon an existing 15-year partnership, which by July will have enabled more than 200 Chinese students to complete part of their degree in Northern Ireland. This coincides with Derry City and Strabane District Council’s signing of a Co-operative City Agreement with Dalian – a visit supported by Ulster’s Confucius Institute.

“This new chapter in our relationship with DUFE builds upon our existing 15-year partnership, which by July will have enabled more than 200 Chinese students to complete part of their degree in Northern Ireland.

“This premier partnership with DUFE in China mirrors our top tier partnerships in the US where we are the only UK business school with embedded relationships with both Harvard Business School and Babson College, Boston in the areas of competitiveness and entrepreneurship respectively.”

The announcement was made during a visit to the country by the largest delegation of academics the University has ever sent to China.  The visit involves four faculties and 17 academic staff who are undertaking eight city visits to strategically develop new and existing partnerships.

“Our partnership with DUFE is the university’s longest-standing and most successful Chinese partnership. Over a third of the DUFE students who study at Ulster University secure First Class Honours, and as a result our alumni are well represented in blue chip financial firms.

“These networks and relationships are enormously beneficial for Ulster University and also help to raise awareness of Northern Ireland in the Chinese market. With representation from each of the four faculties and engagement through sport, arts and culture to computing and nursing, this strategic mission to China confirms Ulster University’s deep and longstanding relationship with China and also our position as a global university.”

During the visit a number of partnerships are also being explored with two Chinese medical schools and including universities in Beijing, Fuzhou, Hong Kong, Shenyang, Wuhan and Xi’a in a celebration of the University’s varied, deep and longstanding relationship with China.