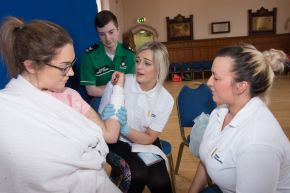 Over 60 year one and year two nursing students played the roles of casualties and survivors at the scene of eleven different simulated community crisis and disaster events. In addition, 210 final year nursing students working in teams had to respond to these situations, caring for the casualties and survivors and leading on the communication with other agencies involved in such emergencies.

The community resilience simulation, linked to Derry City and Strabane District Council emergency plans had eleven different scenarios, seven specifically focusing on floods. The floods across the North West in 2017 caused devastation to hundreds of people when 63% of the average August rainfall fell within an eight-to-nine-hour period. Communities that were impacted by these floods were consulted on the content of this year’s simulations.

Also this year there is a major focus on ‘debriefing ‘ for emergency responders after flood scenarios. Dr Breda Friel from the School Applied Social and Policy Sciences at Ulster University led on the debriefing sessions. Dr Friel has experience of dealing with recent community crises in Inishowen, Co Donegal.

“Regrettably we are never too far from the next community crisis or disaster. This major simulation exercise reflects the local council priorities and provides an important contribution to community resilience in Northern Ireland.”

"The St John Ambulance (North Western Area) are delighted to have been asked to take part in this emergency learning exercise for the student nurses at Ulster University. Several of our volunteers took time out to help with and assist the scenarios. This helped to improve first aid skills and knowledge of how to deal with a flood situation.”

“Foyle Search and Rescue appreciate being involved in this event today it has helped improve our competency and skill levels particularly in our Swiftwater Rescue and medical skills. We benefited from the realistic flood scenarios and hopefully passed on some of the experience we acquired during local flooding where we supported the Emergency services. We would like to wish the nursing students good luck with their ongoing studies.”

The annual Ulster University exercise which started in 2010, comprises a mix of live, simulation and command and control events in order to test the leadership and decision making skills of final year nursing students in crisis, disasters and\or catastrophic situations.