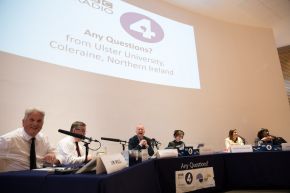 The broadcast also marks 40 years of media research and teaching on the Coleraine campus. In 1978 the then New University of Ulster was the first university on the island of Ireland to offer a media degree and one of the first in the UK. Since then over 2,400 Ulster University graduates are now working in media, film, journalism, interactive media and other related areas in Northern Ireland, Ireland and across the globe.

Over the past 40 years Ulster University has pioneered media research, proposing and developing policies to establish Northern Ireland as a centre for film and TV production and placing Moving Image Arts on the secondary school curriculum. Today Northern Ireland has one of the largest concentrations of TV and film production facilities in Europe with eight sound stages within a 20 mile radius of Belfast.

“We are delighted to host BBC Radio 4 Any Questions from our state-of-the-art studio on campus as part of our Coleraine 50th anniversary celebrations. Ulster University has been at the forefront of media research and teaching for the past 40 years with many of our alumni now leading the news agenda both at home and abroad.

As Northern Ireland’s civic university we encourage open discussion and debate on the key issues affecting the local community. This event is an opportunity for members of the public, as well as our students and staff to submit a question to a panel of national politicians and policy experts, covering a range of political, economic, social and moral issues.”

In September 2018 Ulster University’s School of Communication and Media will run the world’s first MA in International Journalism- Hostile Environment Reporting. This industry accredited programme run in partnership with former police with international frontline experience, military and disaster healthcare experts will train journalists from around the world and domestically to report safely on conflict, disasters, terrorism and security issues.

The programme airs at 8pm on BBC Radio 4 on Friday night and is repeated again on Saturday afternoon at 1.10pm.

Any Questions at Ulster University