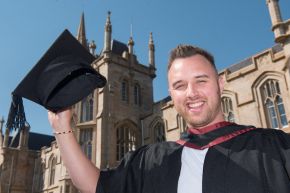 Gary McDermott has graduated with a 1st class honours degree BSc in Physical Activity, Exercise and Health from Ulster University today. In September, he will undertake pioneering research which will focus on improving the health of people with intellectual disabilities through exercise and physical activity.

The focus of Gary’s research was inspired by his late uncle Martin who had Down’s syndrome.

“From spending time with Martin, I saw first-hand the lack of opportunities he had to participate in physical activities which many of us take for granted. I knew that I wanted to do something that would positively improve the lives of others like my uncle.

“The research I am undertaking will focus on developing programmes which will widen access for those with intellectual disabilities, to participate in physical activities helping to decrease the risk of developing long term health conditions.”

Gary will be the first ever Sport and Exercise Research Institute PhD student on the Magee campus and says that his decision to study at Magee was the key reason for achieving such high marks.

“While studying at Magee I received great support and it quickly became very clear that there was an open-door policy with staff who were always there to help. I don’t think I would have benefitted from the academic opportunities available without the help of my lecturers and course directors.”

During his studies, Gary received the Robert Clarke award from The Physiological Society as he had participated in a cultural exchange programme in Beijing where he learned to speak Mandarin Chinese. He also represented Ulster University at the international SEVT conference in the United States which brings together students, sports and industry leaders.

Gary also received the Ulster Edge Excel Award today in recognition of the extra-curricular activities he completed alongside his degree.