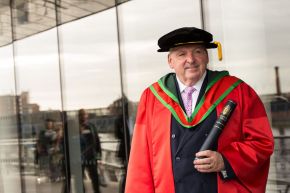 Feargal was born in Warrenpoint and since 2009 has been a Visiting Professor at Ulster University Business School. In this role, he has made a highly significant contribution to the development of the School, through fostering links with leading business figures.

In 2012 he received the prestigious All-Ireland Award from the Institute of Management Consultants in recognition of his “significant contribution to business and public life in Northern Ireland and the Republic of Ireland over the last 20 years”. Other recipients of this award have included Dr Martin Naughton and former Irish President, Mary McAleese.

“It is a great honour to receive this honorary degree from Ulster University in recognition of my civic contributions. I am proud to be a visiting professor at the business school and it means a great deal to me to be among such revered honorary graduates as well as such a promising group of students. I wish them the best in their futures wherever their paths may lead.”