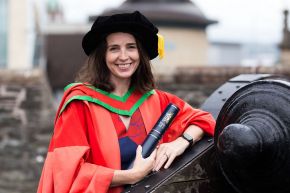 Named as one of the most influential female tech executives in Silicon Valley, Sarah Friar, has received the honorary degree of Doctor of Science (DSc) today for distinguished service to the international technology industry.

A native of Co. Tyrone, she attended Strabane Grammar where she developed a love for maths and science.

Sarah is a passionate supporter of entrepreneurship and despite her success abroad, remains committed to Northern Ireland. She is a co-founder of the Ormeau Baths technology hub development in Belfast, which opened in June 2017 to support Belfast's most ambitious IT freelancers and small businesses and mitigate an exodus of Northern Ireland technology talent.

Since 2012 she has been Chief Financial Officer for Square – a mobile payments company jointly run with Twitter founder Jack Dorsey, which has become one of the world's fastest growing financial technology companies.

While carving out her successful career, she has spoken often about her commitment to redressing the gender balance in the technology industry. She is an example for young women considering careers in science, technology, engineering and maths (STEM).

“I am humbled to receive an honorary degree from Ulster University. I would like to dedicate this honour to the breakthroughs from women in the STEM field which has led me to my own career today. It is a great pleasure to be recognised among a prominent group of honorary graduates and I would like to offer my warmest congratulations to all students graduating today.”