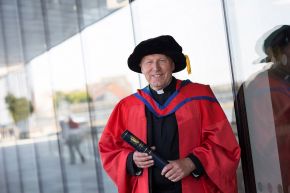 Former Dean of Belfast, The Very Reverend John Mann, received the honorary degree of Doctor of Letters (DLitt) for his civic contribution in Belfast.

His tenure as Dean of Belfast was marked by building relationships and fostering a sense of community within the regular congregation. In 2017 he installed the first Roman Catholic priest as an ecumenical canon in addition to previously installed Presbyterian and Methodist ministers.

Under his leadership, Belfast Cathedral has become a focus for civic events and as a sacred civic space. Over the past three years’ thousands have visited the Cathedral and guided tours and school visits to the Cathedral are also now regular daily features.

He also has worked tirelessly with other religious leaders in Belfast and has made a profound contribution to the civic understanding and acceptance of the concept of a Cathedral Quarter, and, has ensured that the Cathedral remains at the heart of it.

John has also raised over one million pounds for local charities, during his pre-Christmas (Black Santa) sit-out for charity.