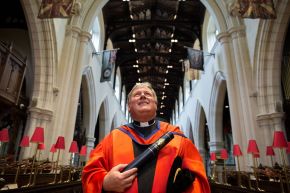 The Very Reverend William Morton has received the honorary degree of Doctor of Letters (DLitt) for his outstanding civic contributions to the community of Derry/Londonderry.

As a former Dean to St Columbs Cathedral, he was dedicated to the service of his parishioners and the building of interfaith relationships. During his tenure, he developed a number of cross community and ecumenical events which helped to strengthened the fabric of the city.

In his search for peace and reconciliation William negotiated agreement around parades though his work with local community groups, police and church leaders.

With the support of his wife Rosemary he oversaw a substantial restoration of the Cathedral and opened it up to the wider community. Not only has it added to the physical structure of the city, it has enhanced the tourism offering and has become a place where music and culture has come alive.

Through the Cathedral’s arts and music programme he initiated, Derry/Londonderry has become the ‘Capital’ in Ireland for Pipe Organ Events.