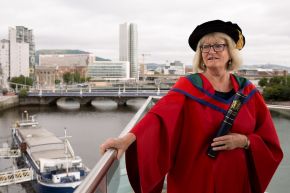 Acclaimed pianist and vocal coach Ingrid Surgenor, received the honorary degree of Doctor of Letters (DLitt) for her contribution to the arts.

A Belfast native she studied at the Royal Academy of Music, London, with Paul Hamburger and the legendary accompanist Gerald Moore.

Ingrid is a senior coach at Glyndebourne Festival Opera, the National Opera Studio, London and the Young Artists Programme at the Royal Opera House Covent Garden and is principal opera coach at the Royal Academy of Music, London. Her television and radio performances have included career documentaries, song recitals and the BBC Cardiff Singer of the World Competition where she enjoyed much acclaim as official accompanist since its instigation in 1983.

A proactive champion of the role of women in choral and opera singing, she is an advocate promoting diversity, equality and social inclusiveness in the genre.

Ingrid is also a National Advisor to the Arts Council of Wales, a Fellow of the Royal Academy of Music, London and has been granted Honorary Fellowships by the University of Wales & the Royal Welsh College of Music and Drama.

‘‘I am thrilled to be receiving an honorary degree from the Ulster University and especially to be honoured in this way in my home country.’’