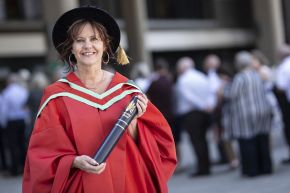 Artistic Director Zoe Seaton received the honorary degree of Doctor of Fine Arts (DFA) for her contribution to the arts.

Zoe is one of Northern Ireland’s most respected theatre directors and has co-written and directed several plays including the internationally acclaimed water theatre productions of The Little Mermaid and Sinbad.

She has changed the ways in which people think about theatre, developing innovative collaborations for the stage; radically adapting classic plays; and creating work in unusual places including care homes, swimming pools and cars to reach out beyond the conventional theatre audience.

She has also devised and delivered large-scale invisible theatre projects tackling significant social issues such as joy-riding and alcohol abuse with secondary school pupils that included workshops and in-school activities and a wide social media campaign that engaged pupils across Northern Ireland.

Zoe’s creative achievements are matched by her role as a creative ambassador for Northern Ireland.