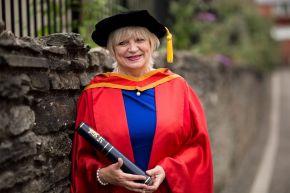 Former Chief Executive of the Western Health and Social Care Trust, Elaine Way, has received the honorary degree of Doctor of Laws (LLD) for her services to health.

A public servant for 25 years, she was dedicated to the health and wellbeing of the communities she served and led significant reform to meet the needs of patients, families and communities for the 21st century.

Elaine has been central in the development of cross border health links including the development of the North-West Cancer Centre and has consistently worked with Co-operation and Working Together, a cross border organisation dedicated to the improving the quality and safety of care in Northern Ireland and the Republic of Ireland.

She previously served as President of the Association of Healthcare and Human Resource Management and received a special award in recognition of her work. She has also spoken nationally about the transformative care that she led in the Western Trust.

In 2016 Elaine was honoured with a CBE in the Queen’s Birthday Honours List.

“I am delighted and humbled to receive an honorary degree from Ulster University, in recognition of my contribution to the health sector. Ulster University is an important organisation that helps the health service achieve its ambitions, and so it is all the more meaningful that the University has chosen to bestow this honour on me. In accepting this, I would like to thank all those who shared my vision for transformation of the service and helped me to deliver that."