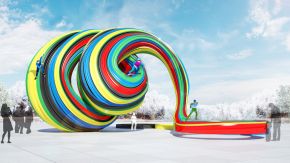 Ralf Sander, Reader in Fine Art at Ulster University’s Belfast School of Art, has been highlighted on the global stage at this year’s 2018 Olympic and Paralympic Winter Games in South Korea, after successfully creating a landmark outdoor sculpture for the PyeongChang Olympic Plaza.

Ralf was commissioned to create the bespoke outdoor exhibition, entitled Connected One, for the Cultural Olympiad during the PyeongChang 2018 Olympic Winter Games; a diverse festival of cultural events, entertainment, and celebrations around the PyeongChang Olympic Plaza and Gangneung Olympic Park during February and March 2018, intended to introduce Korean tradition and artistic value to the world.

Ralf, originally from Berlin, designed the sculpture alongside former colleague, Professor Moon Joo, Dean of Fine Art at Seoul National University. The South Korean Ministry of Culture, Sport and Tourism selected the work through a public art competition co-hosted by the Ministry of Culture and Arts.

The design is based on an inquiry of interested community and stakeholders. The horizontal Olympic Rings symbolize the five participating continents, Africa, Asia, America, Australia and Europe, with six life size figures skiing on a large vortex of colour, including a depiction of Korean Olympic ice skater champion, Kim Yuna.

Commenting on the project, Ralf said:

“In February of last year I was contacted by former colleagues and friends from Seoul University and asked to take part in the development of different ideas and concepts for an art exhibition at the Winter Olympics in Pyeongchang.

“We conducted a public enquiry into what the community and stakeholders wanted to see, with most people identifying the Olympic rings, energy, colour and representations of major winter-sport disciplines as key elements, all of which are exemplified in the finished product.

“Professor Moon Joo and I may have put the project into motion, but the sculpture is a democratic design that intends to engage people of the host country and the rest of the world based on the Olympic values.”

“It is a great honour for Ulster University Reader, Ralf Sander, to have been commissioned to produce this outstanding sculpture for Pyeongchang Olympic Plaza. Ralf was in competition with artists from all over the world to secure this high profile public art commission, which will offer inspiration and encouragement to our students at the Belfast School of Art.

“Our lecturers and professors are practicing artists and designers who are actively involved in research as well as teaching, with much of their art practice being independently recognised as world leading. There is no greater accolade and recognition than seeing Ralf’s design exhibited on the global Olympic stage.”

In addition to his career at Ulster University, Ralf has taught at other prestigious universities in Poland, Warsaw, Berlin and Korea and exhibits worldwide in internationally acclaimed locations, including Museum of Art Stuttgart, Haus der Kunst Munich, Philadelphia Museum, Nowisibirsk Museum of Art and Seoul MoA.

Connected One is on exhibition at Pyeongchang Olympic Plaza throughout the PyeongChang 2018 Olympic and Paralympic Winter Games, 9 - 25 February and 9 – 18 March 2018.