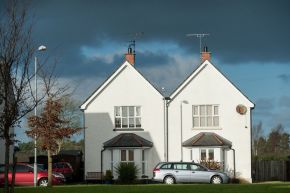 Analysing the performance of the housing market during October, November and December 2017, the overall average price for the fourth quarter of 2017 was £158,285, representing an annual increase of 5% relative to the final quarter of 2016.

However, allowing for differences in sample mix by property type, the weighted increase over the year and the preferred measure for these surveys is a more modest 1.2%.

The volume of transactions in the survey is 2,219.

“In terms of estate agent perceptions, there is a perspective that 2017 had been largely a good year for the local housing market, with property turning over at a reasonable rate and price levels sustained. This has been translated into a feeling of short-term confidence among those in the industry concerning prospects for 2018.

“However, looking at the market with a medium-term perspective, there is still considerable uncertainty as to what impact, if any, Brexit will bring and whether the likely transition arrangements will soften or defer any such impact down the line.”

“The local housing market’s sustainable growth in 2017 reflects the affordability that prevails both in urban and regional locations.  However, this is set against the backdrop of a relatively slow-moving year for house price growth of 1.2%. Following a strong uplift in Q3 2017 of 8.3%, Q4 saw a decline in house price sales of 3.4%. This is nevertheless compatible with seasonal trends and the overall annual picture reflects a steady and confident market last year. That said there are a number of factors which will influence the market’s overall performance in 2018. One of the most pressing issues remains the long-term impact of Brexit with early clarity needed for businesses on the transition period and the long-term relationship with the EU.”

Karly Greene, Head of Research and Equality at the Housing Executive, said:

“The housing market trends of the last year look likely to carry on into 2018, with a healthy level of transactions, a low but sustainable level of house price growth and – importantly – continued availability of relatively affordable options for first time buyers and newly forming households.”