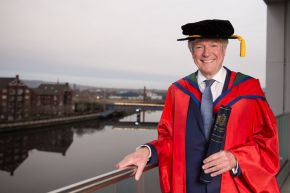 The Director-General of the BBC, Tony Hall, is to receive the honorary degree of Doctor of Letters (DLitt) for his civic contribution in transforming the BBC, along with the promotion of skills, employability and the regeneration of local communities.

Born in Birkenhead, Cheshire in 1951, he was educated at King Edward’s School Birmingham and Birkenhead School, before going to Keble College, Oxford.

In 1973 he joined the BBC as a trainee, initially working at its Belfast newsroom. In a career spanning 45 years, his achievements include the launch of BBC Parliament, Radio 5 Live, BBC News 24, and BBC News Online.

In 2004 he was appointed inaugural Chair of the industry-led Creative & Cultural Skills (Sector Skills Councils), a post he held for five years.

At the Mayor of London and HM Government's request, in 2009 he set up and chaired a board directing the Cultural Olympiad, and also joined the London Organising Committee for the Olympic Games Board.

Tony was awarded CBE in 2006 and created a Life Peer in 2010. He took his seat in the House of Lords as a crossbench member.

“I’m extremely proud to be awarded this Honorary Degree of Doctor of Letters from Ulster University. I’m particularly proud because Northern Ireland is where I first started out in journalism as a BBC news trainee, and where I learnt so much that has helped guide me throughout my career. It’s a great honour to be able to share this ceremony with the latest generation of talented young graduates as they embark on exciting career journeys of their own.”