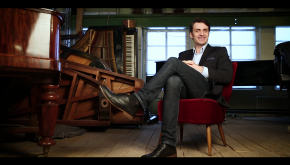 Pianist Ivan Ilic, Ulster University’s International Musician in Residence, will be performing in the Great Hall in Magee on the Tuesday 11 December from 6:45pm – 8:00pm.

Serbian-American pianist Ivan Ilic, a trailblazing classical pianist, has been named International Musician in Residence for the next three years at Ulster University, and we are extremely privileged to have him perform.

Ilic, a longtime resident of France, has succeeded in creating a unique place in the classical music world, thanks to his personal charisma and unusual approach to repertoire. In addition to his solo recital tours, Ilic has written and presented video documentaries, co-produced in-depth radio programmes for Swiss Radio, and written articles for Gramophone, BBC Music Magazine, and other prestigious publications.

Ilic studied music and mathematics at the University of California Berkeley, before moving to Paris on a fellowship and finishing his studies at the Paris Conservatoire and Ecole Normale. His CDs are widely broadcast across six continents and have earned him praise from every major classical music publication.

Lauded for his “restless, inquiring mind” by International Piano, it is Ilic’s efforts to contextualize the repertoire he plays which set him apart. His recent series for Chandos entitled “Reicha Rediscovered” has brought him a new level of recognition, including a recent feature article in the New York Times.

“Ilic is an consummate technician at the piano. But his interest in research and the way he incorporates that knowledge into his playing makes him a fantastic musician to introduce to our students.”

“Ilic understands the challenges facing our students in making a career out of their passion. He has demonstrated a canny ability to pilot his career and use social media to create a niche for himself in a tremendously competitive field. We are very excited to have him around over the next few years.”

“I am eager to return to Northern Ireland and share my enthusiasm with Ulster University’s students. The supportive faculty and wonderful facilities represent a singular opportunity to share what I’ve learned with talented, dedicated young musicians.

“I gave my first recital in Northern Ireland in 2007 and I am delighted about this new chapter in my link to the province.”

Ivan Ilic will coach instrumentalists and singers, give lectures about a career in music, and perform both as a soloist and alongside select students from the School of Arts and Humanities.