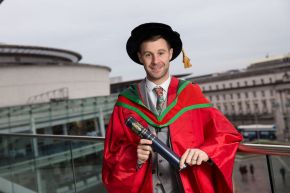 As one of Northern Ireland’s leading sportsmen, four-time World Superbike Champion, Jonathan Rea MBE, is to receive the honorary degree of Doctor of Letters (DLitt) for his outstanding contribution to sport.

Born in Ballymena, his sporting career began in motocross, before moving to tarmac competing in British Superbikes. He competed in the national series, before making the step up into the Supersport World Championship in 2008.

Jonathan Rea has been competing in the top class since his first full campaign at World Superbike in 2009; where he accumulated 15 victories.

Following an impressive season in 2015, he made his lifelong dream a reality by winning his first world title with the Kawasaki Racing Team. In 2016 he became the first champion of this millennium to win a back to back title, beating Tom Sykes and Chaz Davies in a closely contested season.

This year Jonathan became the most successful Superbike racer of all time as the first rider to win four consecutive World Superbike titles. In October, he matched Doug Polen's 1991 record of 17 wins in a World Superbike season as he took Race One victory in Qatar. This victory extended his record run of successive wins in the series to 11.

“I am genuinely so pleased to receive this honorary degree.  Whilst I did very well at school and was an A* student, my passion for motorcycling and ambition to follow my dream of becoming a World Champion, meant that I didn’t get the chance to go to university like many of my family and friends.

“My mum and dad always instilled in us as children that a good education was essential, no matter what job or vocation you were destined for.  As a father now myself I say the same to my boys and this was another fundamental reason for returning home, so Jake (5) and Tyler (3) would be educated here, in Northern Ireland.

“I have to say though, it’s quite ironic that it was a medical doctor who told me 14 years ago that I would never race again, after a motorcycling injury on the track, and now I am being awarded the privilege of an honorary doctorate for my services to sport!  For this reason I would encourage every single person who has ever had a dream or ambitions, to never give up.  Believe in yourself and with the help and encouragement of others you will achieve that dream or those ambitions.”