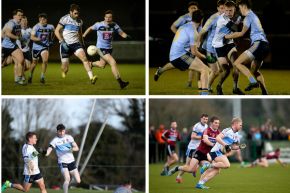 Congratulations to our 28 current students and graduates from Monaghan and Tyrone who will be representing their counties in this weekend’s GAA All-Ireland Senior Football Championship semi-final.

Many of Ulster University's finest Gaelic footballers will be on opposing sides in Sunday's semi-final as neighbours Tyrone and Monaghan battle to reach the September decider.

Both teams are set for what promises to be one of the highlights of the GAA summer following their respective quarter-final defeats against Donegal and Galway, when some of this year's students had a massive impact on the outcome of the games last weekend, including Ryan Mc Anespie, Lee Brennan, Rory Brennan, Ronan Mc Namee, Mark Bradley and Frank Burns.

“On behalf of the University, I would like to wish all our current and former students on the Monaghan and Tyrone panels all the best for this weekend’s semi-final showdown.

“At Ulster, we aim is to promote and develop all aspects of the GAA within the University and to have an impressive 28 former and current students involved in this weekend’s semi-final match, many of whom played on the university team and in the Sigerson cup, is an outstanding representation from Ulster.”

The GAA Football All-Ireland Senior Championship takes place on Sunday12 August with throw-in at 15:30 from Croke Park and will be broadcast live on RTÉ Sport and Sky Sports, with live commentary on BBC Radio Ulster MW and the BBC Sport website from 15:03