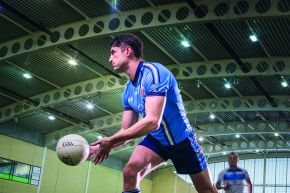 Ulster University’s GAA team is preparing to travel to China on an historic tour of the country as part of the university’s wider programme of engagement in key international markets.

The trip, which will be sponsored by Crumlin-based diagnostics firm Randox, will see a 35 strong team depart on 28 October for a two week cultural exchange that aims to develop and enhance links with a number of Chinese academic institutions.

The team will travel to Beijing, Wuhan, and Huangshi City and play several games as part of an extensive tour promoting sporting excellence at Ulster University and Gaelic Games in particular.

“GAA is of increasing interest to the Chinese people and there is a strong appetite to learn about the various sports, key tactics and the strong cultural identity which Ulster University’s GAA team has developed over many decades. This tour, supported by Randox, will give our team the opportunity to showcase Gaelic football and hurling to a vast audience which is interested to learn more and experience a game first-hand through a number of Gaelic Games masterclasses.”

“As an internationally focused university it is important to continually build new partnerships in this vast market and further enhance existing linkages. From research collaborations with some of China’s top universities to our role as home to the Confucius Institute and Confucius classrooms initiative in Northern Ireland, China remains a significant market with clear potential for growth. We look forward to building on our work in this region and meeting new connections as part of the tour.”

“We are pleased to support Ulster University’s Gaelic team as they embark on a very exciting tour of China. It is one of our most important markets, as we have been exporting to China since 1992 and we have had an established presence in the region for several years. This is a brilliant opportunity for our partnership with Ulster University to profile some of the young sporting talents of Northern Ireland and to strengthen key business relationships in an important market.”