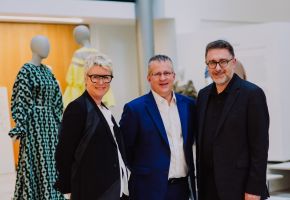 Creative Industries is the fastest growing sector of the UK economy contributing almost £90 billion of GVA; four times the GVA of the automotive industry, six times as much as life sciences and nearly ten times that of aerospace. It is forecast to grow to £128 billion by 2025 and generate one million new jobs by 2030.

Ulster University’s Creative Industries Institute will bring together all strands of the University’s existing world-leading research and teaching expertise across the breadth and diversity of the creative industries including: advertising and graphic design, animation, architecture, film and broadcasting, product design, creative technologies, fashion, music, drama and performing arts, photography and fine art.

“Northern Ireland has a strong and proud history in the creative industries and Ulster University has remained at the heart of the sector for over 165 years. From traditional music, linen and pottery, the sector has stayed close to its roots but has also evolved to include smart textiles, animation, film and more. Its strategic importance must not be under-estimated.

“Our Creative Industries Institute will facilitate collaboration with industry, government and civic partners to develop industry-relevant research that will deliver advances, maximise available resources, shape policy and nurture the skills and experience required to drive the economic, social and cultural regeneration of the region. The Institute is entirely unique as it will cut across all research areas enabling us to pool resources and fully exploit the value of new technology.

“The Creative Industries are cited as one of the key industrial pillars of the UK industrial strategy for the next 10 years, and the sector employs more than five per cent of the entire workforce in Northern Ireland, contributing nearly £1 billion of GVA to the Northern Ireland economy.

“The potential is even more vast and with our proven expertise in this area, Ulster University is now perfectly positioned, through this new institute, to help capture the clear opportunities for Northern Ireland and ensure this region can compete on a global scale.”

Ulster University is investing significantly in the creative industries as a core part of the flagship £263 million Belfast campus development. This is in addition to the new £9 million media and broadcast facilities at the Coleraine campus and a £5 million investment in posts to drive new courses and research in virtual and augmented reality, game design and post-production video effects in response to current, or anticipation of future, market need. New research in the sector will also be supported through a £2.5 million investment in PhD studentships in creative disciplines.