Pictured with the team ahead of their departure are Belfast’s Lord Mayor, Councillor Nuala McAllister and the Chairman of the Ulster University GAA Association, Jack Rafferty. 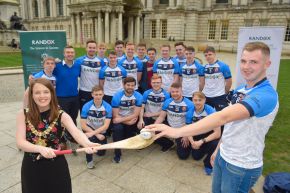 Pictured with the team ahead of their departure are Belfast’s Lord Mayor, Councillor Nuala McAllister and the Chairman of the Ulster University GAA Association, Jack Rafferty.

Ulster University’s GAA team departs on a historic two week tour of China this weekend as part of the university’s wider programme of engagement in key international markets.

Following a reception with the Lord Mayor of Belfast earlier in the week, the 25-strong team will leave Belfast on Saturday morning for the two week cultural exchange that aims to develop and enhance links with a number of Chinese academic institutions.

The trip is being sponsored by Crumlin-based diagnostics firm Randox and facilitated by the university’s Confucius Institute.

The team is spending a week in Beijing before heading to Wuhan and Huangshi City to play several games as part of an extensive tour promoting sporting excellence at Ulster University, in particular Gaelic Games.

“Gaelic games are of increasing interest to the Chinese people and there is a strong appetite to learn about the various sports, and replicate key tactics and the strong cultural identity which Ulster University’s GAA team has developed over many decades.

“We’ll be playing several GAA teams, including a talented Beijing team, and sharing knowledge with the coaches on how to improve the players’ game and training regimes. When we get to Wuhan and Huangshi City, we’ll be taking Chinese language classes, learning martial arts and trying our hand at authentic Chinese cooking.”

“For many of the students, this is a once in a lifetime opportunity to travel across the world to an important global market. As well as promoting sporting excellence and acting as ambassadors for the University and Northern Ireland, they will be instrumental in helping the University build stronger relationships with new and existing partners.”