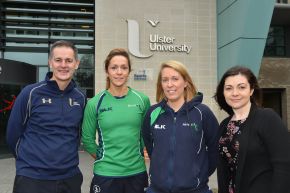 Ulster University and Netball Northern Ireland have announced a major partnership which will cover a wide range of areas including elite performance, workforce development and participation programmes.

Ulster University has a rich history of success in Netball with the combined campus team winning their third successive Intervarsity title in 2017 whilst playing host to the tournament in the new Sports Centre facilities on the Coleraine campus.

The announcement comes on the back of Netball Northern Ireland senior team securing their place at the 2018 Commonwealth Games in Australia.

“We are thrilled to be working in partnership with Ulster University at what is a very exciting time for both organisations. Netball NI are delighted to be able to collaborate with a university with such a history of sporting success and participation opportunities.  It is a great link for us to grow our sport and support our performance athletes as they continue their preparations for Gold Coast 2018.

“The outstanding facilities and breadth of staff expertise will be extremely beneficial for Netball NI as well as providing hands on experience in a National Governing Body environment for students who want to follow this career path.”

“We very much welcome this partnership opportunity to work alongside Netball NI as they strive for success at the highest levels of their sport.  As a university we are uniquely positioned to offer support and expertise which can help shape their development and performance in the short and longer term.”

“We look forward to enhancing their future potential on and off the court as players, coaches, ambassadors and leaders in the world of sport and beyond.”