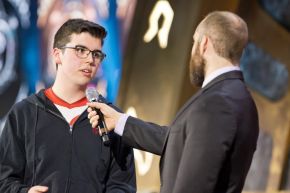 An Ulster University Computing Science student has been showcasing his skills on a global stage at the world’s largest gaming convention in California.

Second year student James McKeever secured an all-expenses paid trip to BlizzCon 2017, representing Europe in the finals of the esports gaming tournament and landing fifth place in the process.

“Reaching the finals of the prestigious BlizzCon esports tournament and securing fifth place overall as part of the European team is a tremendous achievement.

“James is a testament to the calibre of world-class students we attract at Ulster University and his success underlines the leading quality of research and teaching taking place across the School of Computing, Engineering & Intelligent Systems on the Magee campus.

“The competition also gave James the chance to experience one of the world’s largest gaming conventions and will inevitably enhance his knowledge and open up his mind to the wealth of career opportunities which exist on a global scale in the world of games development.”