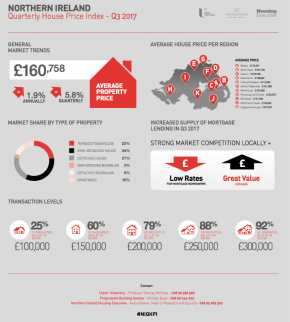 A healthy performance by the housing market in Q3 2017, which saw prices increasing by 5.8% on average, suggests that uncertainty about wider macro-economy concerns may be diminishing, according to Ulster University’s latest Quarterly House Price Index report.

Ulster University’s research is produced in partnership with the Northern Ireland Housing Executive and Progressive Building Society. Analysing the performance of the Northern Ireland housing market between July - September 2017, the report reveals an overall average house price of £160,758, up 1.9% over the year. The volume of transactions in the survey is 2,295.

Activity during the first six months of 2017 was characterised by sluggish and variable rates of price growth though underpinned by strong sales volumes. The firming up of price levels in this quarter suggests that the housing market is picking up in the second half of the year.

According to the report the number of first-time buyers has increased, however the reliance on the ‘bank of mum and dad’ remains a significant factor in these transactions.

“The latest survey of the Northern Ireland market shows a healthy performance during the third quarter suggesting that concerns about uncertainty in the macro-economy, the potential impacts of Brexit and the lack of a functioning local Executive are having a diminishing effect on the private housing sector.

“The survey highlights that average price levels are generally to the upside and that the volume of transactions remains at a high level.”

“The underlining outlook is that we have a strong housing market in Northern Ireland with more affordability than other regions of the UK.  This has been reinforced by the 5.8% increase in property prices over the quarter.

“The research has highlighted a more buoyant market than the last quarter however there continues to be a variable picture regionally.  In Belfast the average price of townhouses is up by a substantial increase of 15.8% across the year. South Belfast has regained its position as the highest priced sub market in the city with the average house costing £230,010.

“Whilst external pressures remain including the political vacuum, Brexit and the recent rise interest rates, the market remains resilient which supports a positive outlook for the months ahead.”

Karly Greene, Head of Research and Equality at the Housing Executive, said:

“The findings of this latest analysis carried out by Ulster University for the Housing Executive indicate that the housing market in Northern Ireland continued to perform strongly during the third quarter of 2017.

“The average sale price of just under £161,000 is in line with an overall trend for sustainable house price growth, and the number of transactions in the sample points towards a healthy level of activity in the market.”

The full report can be found at https://www.ulster.ac.uk/research/institutes/built-environment/centres/research-property-planning/housing-market-reports/house-price-index/