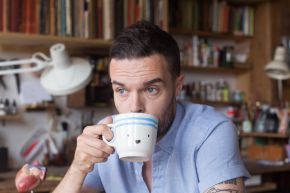 Jeffers, the renowned artist, illustrator and writer, was confirmed as the recipient of the Professional Achievement Award in recognition of his distinguished and exemplary leadership and achievements in his industry, and for demonstrating the highest level of integrity and character in his professional career.

UK alumni now living in the US after completing their higher education studies in the UK within the last 15 years were eligible to apply or be nominated for the awards.

Oliver Jeffers graduated from Ulster University in 2001 before carving out a successful global career. His work as an illustrator saw him deliver for a range of global clients but he became a household name in 2004 when his first children’s book was launched to critical acclaim. He now lives in the US.

“Oliver’s contribution to art and the world of illustration is entirely unique and exceptionally special. He has an ability to draw in his audience and capture their imaginations, whether through his exhibition work, rock band album covers, children’s books or even commercial design. His work is distinctive and engaging but it is his integrity and professionalism, which sets him apart, and sets the bar for others.

“I am delighted to see the British Council recognise Oliver in this way. He is an inspiration to our graduates and students; an individual who represents the very ethos of Ulster University and our ambition to drive and deliver positive impact around the world.”

Created by the British Council and UK higher educational institutions, the awards are intended to recognise the outstanding achievements of alumni who are now using their UK higher education experience to bring benefits to their communities, professions, and countries.