Ulster University graduate has her eye on the ball 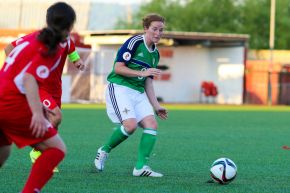 The captain of Northern Ireland’s international women’s football team – and one of Ulster University’s most recent graduates - has pledged to use her passion for the Beautiful Game to inspire the next generation of female footballers.

Marissa Callaghan (31) from West Belfast has graduated with an Advanced Certificate in Performance Analysis and Coaching Practice at Ulster University’s Jordanstown campus.

Having risen up the ranks of women’s football over the last seven years, Marissa has held several notable coaching roles alongside her own international football career, most recently, Female Football Ambassador for the Irish Football Association and Academy Director at Cliftonville Ladies.

“When I left school, I travelled to America on a football scholarship; that’s when I knew I wanted to get into football coaching. I came home in 2005 and decided to take on a Foundation Degree in Sports Coaching at Ulster University. To gain experience I volunteered as a coach within my own Football Club and worked with other community organisations.

“In 2010, I was offered my first full time post as a Female Soccer Active Community Coach. I worked there for six years before I was offered a job within the Irish Football Association as a Female Football Ambassador. I focused all my attention on becoming a football coach and didn’t give any other careers a thought.”

Building on her professional experience, Marissa wanted to improve her skills and develop further as a football coach. The Advanced Certificate in Performance Analysis and Coaching Practice at Ulster University’s Jordanstown was the next natural step.

Juggling training and coaching commitments with her studies was often challenging but ultimately rewarding:

“Managing my time was a massive challenge for me during my studies. I have a very busy schedule juggling full time work, training as an international football player and I also volunteer as a coach and Academy Director with my football club Cliftonville Ladies.

“I really enjoyed my time at Ulster University; the lecturers were fantastic and supported me throughout my time there. I gained knowledge and experience that has given me the tools to become a better coach.

“It’s amazing what you can achieve when you enjoy something.”

Looking to the future, Marissa wants to continue to make her mark on local women’s football.

“My passion is women’s football. I hope to keep developing as a coach through my current job role. Looking forward, I want to gain an A Licence in Football Coaching and continue to work in Women’s Football in Northern Ireland.

“I want to be a role model for young female players. Playing football has given me so many opportunities on a personal and professional level. I hope I can inspire the young players through my experience playing and coaching football.”

Marissa is one of four full time members of staff from the Irish Football Association to graduate from Ulster University this month. Referee Development Manager, Lee Tavinder, Women’s Domestic Football Manager, Gail Redmond and Diarmuid O’Carroll, Club and Community Development Officer at the IFA also graduated with The Advanced Certificate in Performance Analysis and Coaching Practice from Ulster University.

In addition, following the success of the Northern Ireland and Republic of Ireland teams in the 2016 UEFA European Football Championships, managers Michael O’Neill and Martin O’Neill last week received honorary degrees from Ulster University for their outstanding contribution to sport.