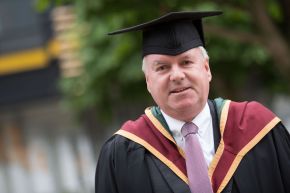 A Dublin motorsport legend has received a Masters from Ulster University for research that could transform the way that major races such as Formula One Grands Prix manage the volunteers needed to run their events.

Ronan Morgan, 62, whose career in motor sport spans 40 years, received his MPhil from Ulster University for a research project in which he has devised the first ever competency framework for motorsport volunteers.

As general manager of the Automobile & Touring Club of UAE (ATCUAE), Mr Morgan oversees and licenses more than 140 motorsport events in the Emirates each year. He has been clerk of the course for the season ending Abu Dhabi Formula 1 Grand Prix since its inception in 2009, having made the transition to the business of organising motor sport events after a successful career competing in them.

He was previously a professional rally co-driver, winning the Circuit of Ireland in 1984 with Billy Coleman and the Middle East Rally championship 10 times with driver Mohammed Ben Sulayem, one of the Arab world’s most influential motor sport figures.

“My thesis on ‘Developing a Competency Framework for World Motorsport’ was born from the passion I have as a Formula 1 organiser to fill the void that exists in the training of motorsport officials and identifying the pathway and recognition they so need and deserve.

“I travel to different countries to share my expertise with countries that are seeking to develop a Formula 1 race or to build their profile in motorsport and I believe one of the biggest challenges they have is in building up the high numbers of qualified and competent volunteers needed to stage a race event.”

He expects to meet with the FIA, motor sport’s governing body, to discuss how the findings of his thesis could assist the implementation of a framework for volunteers across all events. The ATCUAE has already begun to implement some aspects of his framework for the Abu Dhabi Grand Prix in November.

Mr Morgan chose Ulster University because of his experience of working with Professor David Hassan on an economic impact study for Rally Ireland, a World Rally Championship event that he brought to the island of Ireland in 2007 alongside co-promoter Sean O’Connor.

He said Professor Hassan had been a huge help to him through the challenge of attempting to gain academic qualifications after so many years out of formal academic study, providing invaluable guidance, support and encouragement. Starting the project later in life, Ronan said he needed that help to put his knowledge of the subject into a structured format.

“One of the proudest moments of my life was when I received the news I had finally successfully achieved my MPhil degree. It proves that you never know what you are capable of until you embrace the task.

“My qualification will give me the opportunity to look at further opportunities in the sport from a more structured academic viewpoint.

“It was a difficult journey and it would never have happened if Professor Hassan and my colleague Sean O’Connor hadn’t given me the self-belief that I had it in me to achieve such a milestone in my life. In motorsport terms they both ‘swept a lot of debris off the track’ for me along the way.”