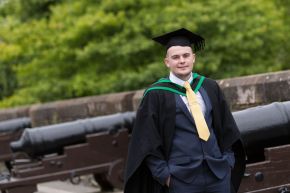 A young leukemia survivor has graduated from university, following what he has described as the most challenging experience of his life.

Shaun Haw (23) from Mayobridge outside Newry, County Down graduated with a BSc Hons in Accounting and Advertising from Ulster University on Monday 10th July.

It was a poignant and emotional celebration for the bright young student, who, just 12 months ago was facing a blood cancer diagnosis.

As he was preparing to sit his final year exams at Ulster University’s Magee campus last summer, Shaun became unwell. In June 2016 he was diagnosed with acute myeloid leukemia and his hopes of completing his degree were put on hold in order to undergo life-saving treatment.

Between June 2016 and January 2017, he underwent four rounds of intensive chemotherapy at Belfast City hospital.

"It was a very tough time for me and for my family. I went from being a normal, healthy young man, playing football and preparing for my final exams to facing a leukemia diagnosis. It was a very scary time.

“I didn’t know what to expect. Initially I had hoped I would be able to complete my exams and coursework in hospital but as my treatment progressed, it became clear this wouldn’t be possible.

“I had been planning a trip to New York with my girlfriend after graduation and was on my way to buy a suitcase after what I thought was a routine hospital visit. Everything changed so quickly. It was like my life was put on hold.”

A year on, Shaun is in remission and has been given a clean bill of health. Speaking ahead of his graduation ceremony at the Millennium Forum on Monday 10th July, his sights were firmly set on the future.

“I am healthy now and getting back to myself. I have to go for regular check ups and everything has been normal so far. It’s a huge relief to me and to my family. I was very lucky to benefit from exceptional treatment – the Cancer Centre in Belfast is world-class and I owe so much to the doctors and nurses there.

“I said that I would complete my degree no matter what, when I finished my treatment I got back to work and managed to get a solid 2:1, of which I’m very proud.”

In addition to completing his treatment and studies, Shaun has joined forces with family, friends from London and even a celebrity supporter in the form of Chelsea footballer, Nathaniel Chalobah in recent months to raise vital funds for a range of local charities including Macmillan Cancer Support, Clic Sargent and Cancer Fund For Children. He also plans to fundraise for Friends of the Cancer Centre to support their work with young people facing similar situations.

Looking to the future, Shaun is now focusing his energy on exploring the possibilities that lie ahead post graduation with a view to developing his career and securing his first full time job.

“I had always enjoyed maths and thought that I would like to be an accountant but now I'm veering more towards the creative element that I really enjoyed through the advertising element of my course. The joint degree discipline provides great flexibility and will allow me to keep my options open.

“I enjoyed every second of my time at University and I loved living in Derry for three years. I met friends for life during my time there and I also met my girlfriend, Shauneen there, who helped me the whole way through my treatment."

As he prepares for graduation, Shaun says his experience over the last year has changed his outlook on life. He says:

“I’m now firmly of the mantra that you should ‘do as much as you can, when you can'. Life is too short.”