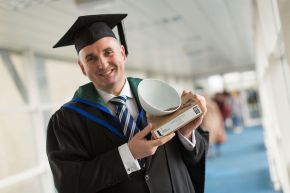 The Distinguished Graduate of the Year Award is sponsored by First Trust Bank and recognises graduates for outstanding achievement in their chosen field.

Colin graduated from Ulster University with first class honours in Design in 1995 and since then his career has gone from strength to strength.
Colin’s children’s TV production company Sixteen South employs over 100 people, has won more than 30 major international awards and is rated among the UK’s top independent TV companies. Its shows include Lily’s Driftwood Bay, Pajanimals and Sesame Tree, a co-production within the USA team behind Sesame Street.

Under Colin’s direction, Sixteen South produces all its shows in-house in Belfast, playing a key role in Belfast’s growing reputation for excellence in the creative industries.

“I'm really honoured to receive this award. Ulster University is where I realised my passion for design and grew many of the skills I use today. For me, studying at Ulster was a great place to delve into the subject I'm so passionate about, grow confidence in my own abilities and make life-long friends.”

“We are delighted to award Colin with our Distinguished Graduate Award. Colin is an excellent ambassador for Ulster University; his creativity, drive and ambition have allowed him to excel in his chosen field. Colin has distinguished himself as a highly creative producer and entrepreneur whose work has been met with worldwide acclaim. His success serves as an inspiration to Ulster University students and alumni.”

“We have been proudly supporting the Distinguished Graduate Award since 2001 to help recognise the invaluable contribution that graduates make to the lives of others and to society as a whole. We  offer our congratulations to this year’s deserving winner, Colin Williams. As founder of the multi-award winning Sixteen South TV production company, now rated among the UK’s top independent TV production companies, Colin and his team are helping put the Northern Ireland creative industry on the map and we are delighted to award Colin this prestigious accolade.”