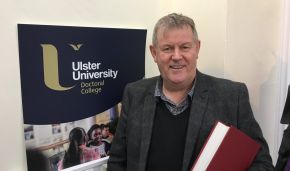 The rise of the Celtic Tiger marked a return to his roots in more ways than one for former construction boss Tony Mac Ruairí who graduates with a PhD in Irish and Celtic studies from Ulster University today.

Now a well-known sean-nós traditional singer and prominent member of award-winning traditional music group Clann Mhic Ruairí, Tony returned to his native Rann na Feirste, County Donegal, with his wife Bridie and their three children Megan, Cian and Mia in 2006 after running a successful business in England for many years.

But construction soon took a back seat when Tony’s passion for Irish language and music took him down a new path. He now combines teaching Irish and performing  across Europe and Scandinavia with his three brothers and daughter Megan.

Tony explains that although he had  always had a deep appreciation for the Irish language and a love for traditional music and song, it was coming back to Donegal that inspired him to reconnect with the Gaelic diaspora and embark on a diploma in Irish from Ulster University.

“Like many young people in the 1980s, I emigrated to England in search of work when I was 18 and never had the opportunity to pursue third level education. Returning home and starting the diploma in Irish really inspired me to learn more about the history and traditions of the Gaeltacht region where I was reared.

“I went on to complete a five-year part-time degree course with Ulster University and then did my Masters. By then the economic downturn meant that the construction business had slowed down – but when one door closes another opens – and it gave me more time to concentrate on my studies and to teach as well as performing with Clann Mhic Ruairí.”

Tony is also vice-chairman of Áislann Rann na Feirste, a community centre which he helped set up in the area and which serves among other things as an outreach centre for young people from all over the country coming to learn more about the Gaeltacht region and its traditions.

“Understanding and preserving the Gaelic song tradition of north-west Donegal became the focus of my PhD . My research analyses the importance of this oral tradition and looks at how it still exists to this very day. Its prevalence and rich heritage has allowed traditional singing and trad groups from the area such as, Skara Brae, Clannad, Altan and Clann Mhic Ruairí to enhance their repertoires, and in so doing they delighted audiences all over the world.

“Sadly, during the course of my PhD my own father, who was a tremendous inspiration and source of information about the oral traditions of the area, passed away. I dedicate my thesis to him and he will be much remembered as I celebrate this wonderful achievement today.”