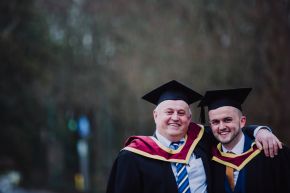 It's double celebration for father and son duo Paul and Tony Ward as they both graduate with an MBA from Ulster University.

Paul, a successful businessman and entrepreneur with over 20 years experience in the food industry, was encouraged by his two sons to consider third level education as they were exploring their own options.

When Tony, his eldest son, who curently works for Danske Bank, enrolled on the MBA course at Magee in order to gain a competitive edge in financial services, Paul signed up alongside him  and has never looked back.

Paul, who is originally from Campsie, County Derry, but now based in Longford, said:

“I have worked in the food industry most of my life – sourcing artisan breads from across Europe and adapting them for the Irish and UK markets.

“Although I run a successful business I never had the opportunity to progress to third level education and when I saw my sons considering an MBA I thought how well it would complement my own working life while giving me the chance to help support them at the same time.

“My second eldest son Ciaran ultimately ended up moving to study in England, but  for Tony and I Magee was the best option and we have never looked back.

“It was great being able to study alongside my son – I spent a lot of my career working away from home and this gave me the opportunity to do something great with Tony. There was a bit of competition between us and if I got a higher mark that him (which didn’t’ happen very often ) I would really rub it in ! When we were doing assignments together it was good as we were able to keep the pressure on each other to get things done.”

Paul admits that balancing work, study and family life wasn’t always easy, but the sense of achievement of completing an MBA and the sense of fulfilment it gave him made it all worthwhile. He  said:

“I feel very proud to be graduating from Ulster University today. I nearly gave up after the first economics lecture because I thought  I would never be able to do it but the MBA has given me a broader vision of business in general and reinforced many things which I was unsure of. It has given me an overall confidence in all aspects of business and was a great course.”