Pictured is lead researcher Patricia Belford from Ulster University’s Belfast School of Art with one of the historic glass plates. 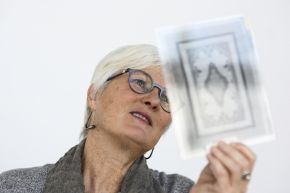 Pictured is lead researcher Patricia Belford from Ulster University’s Belfast School of Art with one of the historic glass plates.

The project, which has received over £61,000 funding from the Heritage Lottery Fund (HLF), will see 1600 glass plates restored and digitally categorised by Ulster University. The University experts will also conduct further research into the history of Jacquard damask design and run a series of exhibitions open to the public in Spring 2017.

Lead researcher, Patricia Belford from Ulster University’s Belfast School of Art, said: “With Ulster University’s global talent and expertise across the breadth of design technology, it is a privilege for us to have the opportunity to restore and celebrate such historic plates.

“Most of Northern Ireland’s linen industrial heritage has been sold, lost or destroyed. In 2007 a large collection of the plates used in the printing process were found abandoned in the old County Armagh factory of the William Liddell Company, which in its time was one of the world’s largest privately owned linen manufacturers.

“The plates have been largely inaccessible to the public because of their fragile state.  Through this research Ulster University will preserve this rare insight into an integral part of our manufacturing heritage for the local community and for future generations. It will also allow us to celebrate the rich legacy of the textile industry that played such a vital role in the social and economic development of the region.”

Paul Mullan, Head of Heritage Lottery Fund NI added: “We were pleased to be able to support this delicate glass plate restoration project. The ability to replicate intricate designs was essential to the success of the Irish Linen industry and the glass plates enabled this to happen much like a photographic plate or negative.

“The collection of plates also represents a collection of the designs used in the industry and the project will also explore that rich heritage. The project was funded through the Our Heritage grant programme, which is an open programme that allows groups to explore a wide range of heritage topics.”