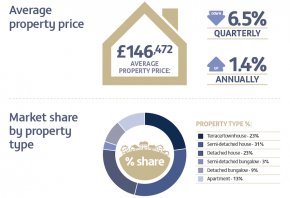 Ulster University's latest research has painted an uncertain picture of Northern Ireland's housing market for the first quarter of 2016.

Produced in partnership with the Northern Ireland Housing Executive and Progressive Building Society, Ulster University's research points to an easing back of the average house price compared to the strong market prevailing throughout the final quarter of 2015. However the survey also reveals a strong sales volume, consistent with previous quarters.

The University's research suggests that the overall average house price of £146,472 for the first quarter of 2016 is lower than might have been anticipated based on the strong growth during 2015, particularly in the third and forth quarters. It highlights a 1.4 per cent weighted increase in average house price over the year but a 6.5 per cent weighted decrease over the quarter.

Once again, the distribution of sale prices highlights the affordable nature of the housing market in Northern Ireland relative to other UK regions, with two-thirds of the houses sold at or below £150,000. The research indicates that at a regional level, a broadly similar pattern of lower average prices is apparent for the first quarter of 2016.

Lead researcher, Professor Stanley McGreal from Ulster University said: "The research statistics are reflective of mixed feelings by the sector across Northern Ireland with some estate agents attributing the apparent slowing in first quarter simply to a seasonal fluctuation, others attribute it to house buyers' concerns of economic uncertainty.

"When it comes to overall performance by property type, the average price of terraced/townhouses, detached bungalows and apartments have increased over the year. In contrast, semi-detached and detached houses have experienced a slower rate of annual growth. Over the quarter, all property types, with the exception of semi-detached bungalows, have suffered reduced price levels."

Joe Frey, the Housing Executive's Head of Research, commented: "A combination of a higher than expected increase in prices in the previous quarter and uncertainty surrounding the EU referendum probably explain the slight downturn in the market. However, given that transaction levels remain high and there is little sign of a significant affordability issue outside Belfast, the indications are that the market will continue its gradual recovery."

Michael Boyd, Progressive Deputy Chief Executive and Finance Director commented "Northern Ireland has experienced consistent growth within the housing market over the last 18 months, with a strong performance in 2015. With projections for further growth within this sector, strong market transactions in Q1 have reflected that confidence. However a number of factors including the prolonged Brexit debate, EU referendum, Assembly elections and stamp duty charges have contributed to the cooling of prices in the first three months of the year.

"While lack of supply is still an issue, houses in Northern Ireland remain very affordable, particularly when compared to the rest of the UK, which is good news for local house buyers. The mortgage market also remains buoyant with a significant increase in the first quarter of 2016 with strong market competition supporting low interest rates which also delivers great value for money within the Northern Ireland market.

"Mortgage activity across Progressive's twelve branches have grown in Q1 2016 with a very positive 34% increase compared to the same period last year. Our focus for the remainder of 2016 will continue to be to provide opportunities and quality mortgage offerings for potential home owners."