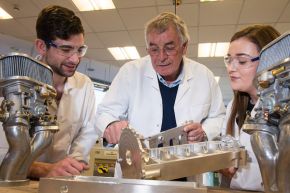 Renowned Formula One racing car designer and commentator, Gary Anderson, has been inspiring the next generation of engineers during a visit to Ulster University.

Formally the chief mechanic at McLaren, Gary, who is originally from Coleraine, was at Ulster University to take part in the Life Stories series, a series of in-depth interviews that explore the life and achievements of Ulster University's distinguished alumni.