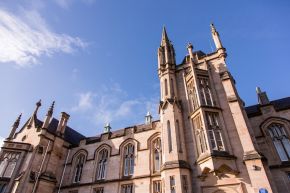 "This proposal is in the very early stages of development and I have asked senior officials within my department to engage with discussions to explore the potential of a medical school in the North West. It is proven that medical graduates are more likely to seek employment close to where they have been educated. Such a school could provide a platform to attract and retain skilled people into the medical profession, especially those from the North West area. That is good for the economy, skills development and will improve the overall health and well-being of citizens."

The Minister continued: "Both Ulster University and the Western Trust are recognised as centres of excellence within education and research. The Ulster University already has Schools of Biomedical Sciences, Health Sciences (including Allied Health Professions), Nursing, Psychology and Pharmacy, and research in Biomedical Science is ranked within the top three out of 94 universities in terms of research power."

The Minister concluded: "Further development of this proposal, which sees GP training and prioritising the quality and safety of patient care are at its core, is underway. I look forward to seeing the outcome of that work in due course."

"I am delighted that the Health Minister has added his support, and that of his department, to Ulster University's plans to develop a graduate medical school in Derry~Londonderry. I strongly believe that given our leading role in personalised medicine at the C-TRIC facility, our position as one of the top nursing schools in the UK, existing partnerships with Altnagelvin Hospital and, the broader University's reputation for world-leading excellence in biomedical research, that our Magee campus is the perfect location for such a strategically important development.

Plans are at an early stage and a business case is currently being developed to move this proposal to the next phase. I look forward to working with the Health Minister and key stakeholders, all of whom have a role to play in making the medical school a reality.

We have strong ambitions for Ulster University in Derry and remain fully committed to realising its full potential and delivering significant skills and economic benefits to the wider region."