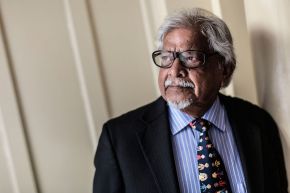 Dr Arun Gandhi, grandson of Mohandas K. “Mahatma” Gandhi, will today deliver an inspiring speech on peace and non-violence at a special lecture hosted by Ulster University at its Magee campus in Derry~Londonderry.

The visit is the first headline event to be hosted by Ulster University’s new John Hume and Thomas P. O’Neill Chair in Peace, Professor Brandon Hamber, which is funded by the International Fund for Ireland (IFI).

Dr Arun Gandhi’s grandfather was India’s legendary leader Mohandas K. “Mahatma” Gandhi. Mahatma was a political campaigner who fought for Indian independence and the rights of the Indian poor. He inspired movements for civil rights and freedom across the world by practising nonviolence and truth in all situations and advocated that others do the same.

During his visit Dr Gandhi will meet with Ulster University students and staff as well as community leaders and special guests before sharing the lessons he learned while growing up in his grandfather’s home in South Africa. He will also reflect on the importance of learning for future generations to build and capture a culture of peace.

John Hume and Thomas P. O’Neill Chair in Peace, Ulster University’s Professor Brandon Hamber, said: “I am immensely proud to welcome Dr Arun Gandhi to Ulster University to share his grandfather’s teachings of non-violence and his quest for peace.

“His visit is a huge endorsement of the University’s international peace and conflict centre INCORE which is linked to the John Hume and Thomas P. O’Neill Chair in Peace.

“Ulster University has pioneered research into peacebuilding and supporting communities through conflict since the 1970s and is frequently called upon to help build peace in conflict zones all over the world.

“As Chair I have ambitious plans to further the impact of Ulster University’s work both locally and internationally and further enhance INCORE’s reputation as a sustainable centre of international excellence in peace and conflict studies.”

The John Hume and Thomas P. O’Neill Chair in Peace at Ulster University received £3 million financial support, including £1.4 million from the International Fund for Ireland. It honours Nobel peace prize winner and Ghandi prize for peace winner, John Hume, and Speaker of the House of Representatives, Thomas P. O’Neill, for their roles in advancing peace in Northern Ireland.

Chairman of the International Fund for Ireland, Dr Adrian Johnston, said: “Polarisation and extremism have become acute global issues and Dr Gandhi’s call for a culture of peace reflects the journey made by our communities and the lessons we can share on the international stage. In the John Hume and Thomas P. O’Neill Chair in Peace, we are supporting a timely contribution towards both local peacebuilding efforts and world leading research into conflict resolution.

“We are very fortunate to have someone of Professor Brandon Hamber’s calibre take on this challenge and I wish him well in this exciting new role. I have no doubt that he will be in instrumental in sharing our experiences of peacebuilding with other regions emerging from conflict and influencing the next generation of peace builders.”

The role of the Chair is to build upon the work of the International Conflict Research Institute (INCORE) headquartered at Ulster University’s Magee campus in applying lessons from Northern Ireland’s peace process to conflict zones and training the next generation of peacebuilders in Northern Ireland and across the world.