Laura McKeague is preparing to embark on her new career in the technology industry with Kainos. 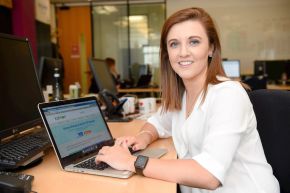 Laura McKeague is preparing to embark on her new career in the technology industry with Kainos.

Ulster University graduate Laura McKeague from Dunloy has followed up a successful placement with leading IT company, Kainos, by landing a graduate position as a software developer.

Graduating today with a BSc in computer science, Laura's involvement with Kainos started in 2013 when she took part in the Kainos AppCamp. The initiative is designed to develop the next generation of software developers and tech entrepreneurs, providing them with hands on experience in coding.

Over the last 25 years Ulster University has teamed up with Kainos to provide its highly skilled undergraduate students with work placements across software development and infrastructure, as well as non-technical areas such as design, human resources, marketing and business.