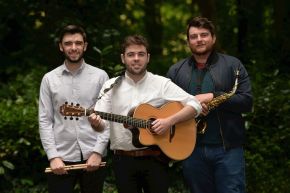 Three childhood friends from County Down will celebrate a unique achievement when they graduate together from Ulster University with music degrees today.

The trio, who live 10 minutes apart, inspired each other to follow their passion for music and are looking forward to being side by side when they graduate from Ulster University's Magee campus with honours in music.

Joshua, from Saul close to Downpatrick, and David and Conor, who hail from Crossgar, are all 21. Joshua is a keen clarinet and saxophone player, David enjoys guitar while Conor loves the drums. They were in a band as children and maintain a strong bond to this day.

David explained: "Myself, Conor and Josh all ended up studying for a degree in music at Ulster University. Since we were younger we have always had a keen interest in the performance and study of music, which over the many years has strengthened our close bond of friendship.

"We went to the same primary school and secondary school, St Joseph's Primary School in Crossgar and St Patrick's Grammar School in Downpatrick. Also, the three of us all studied music at GCSE and A-Level together. We could have potentially all been at different universities but I am extremely happy that I have got to spend the past 3 years with my best friends. I am very lucky."

On special moments during their time studying at Ulster University together, David added: "We sang in the Scottish parliament buildings in Edinburgh with Ulster University's choir. We also sang for former President Bill Clinton in the Guildhall Square in Derry~Londonderry."

Conor, who through his studies had an opportunity to play at the iconic Carnegie Hall in New York alongside Joshua, said: "Music has always been a huge part of our lives. Personally, everyone in my family either played an instrument or was involved in music in some capacity. I wanted to pursue my passion for playing music, especially my favourite instrument, drums.

"Coming into the degree I had difficulty with music theory but through the amazing lecturers I was able to overcome this and if it wasn't for them I would not have achieved the classification I was awarded. Going to university has also shown me that living away from home can be a daunting but amazing experience, especially when you live with some of your best friends. It has also shown me that budgeting money is not as easy as you would think."

Joshua said: "Anything that we didn't understand, we came together to help each other and tutor each other through those obstacles. I think every student says the same but I'd like to thank my lecturers for helping me through my degree. I couldn't have done it without them. I truly believe the lecturers in the music degree such as Dr Linley Hamilton and Dr Shaun Ryan have done themselves proud. I personally been touched by the dedication and passion that they have to teach and become a role model for each student. They became friends of their students, not just teachers."

David hopes to become a primary school teacher and to that end has secured a place on the Primary Education PGCE course at Ulster University. Conor is aiming to obtain a job in instrumental teaching/tutoring or in the field of sound engineering. Meanwhile, Joshua's dream is to become a leading saxophonist on the Irish music scene and to complete a Masters degree in performance.