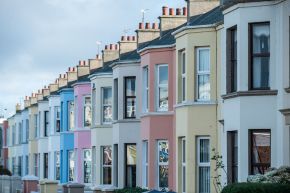 Northern Ireland's average house price is up nine per cent from the same time last year indicating that strong market conditions are prevailing, according to Ulster University's latest research.

The most recent Quarterly House Price Index examines the performance of Northern Ireland's residential property market over October, November and December 2015. It is produced by Ulster University in partnership with the Northern Ireland Housing Executive.

The University research, based on a sample of 1,951 house sales in the final quarter of 2015 reveals, an overall average price of £154,685. In relation to price performance, the average price is up by nine per cent over the year and 4.7 per cent over the quarter. The volume of sales is marginally lower than the third quarter of 2015, however largely consistent with the level of trading activity throughout the rest of the year.

Over the quarter 62 per cent of houses were sold at or below £150,000, which the University report suggests is an indication of the affordable market that still exists in Northern Ireland. The share of newly built property increased by five percentage points to 19 per cent from the final quarter of 2014, signalling a steady increase in private sector housing development.

Lead researcher, Professor Stanley McGreal from Ulster University said: "This Ulster University research provides a quarterly snapshot of the housing market helping to inform those involved in the buying or selling process of local trends and developments.

"The strong property market during the final quarter of 2015 is reflected in higher overall average prices across most property types. The highest rate of annual increase was seen by terrace/townhouses up by 19.3 per cent over the year to £102,571.

"At a regional level a more variable picture is apparent across the market. House prices in Belfast increased over the year, in particular apartments increased significantly by 22.3 per cent since the fourth quarter of 2014 to £136,933. However quarterly performance was more modest.

"The housing markets in North Down, East Antrim, Fermanagh and the North West appear to be consolidating after enjoying a buoyant third quarter. In contrast, the average house prices in Lisburn, Mid Ulster, Craigavon/Armagh and Mid and South Down have seen an increase."

Joe Frey, Head of Research at the Northern Ireland Housing Executive, added: "This is the highest annual rate of increase in house prices since the start of the major downturn in 2007 and confirms that the housing market has made substantial progress on the road to recovery. It is important, however, that the supply of new homes increases again in order to prevent the re-emergence of a more widespread affordability problem."