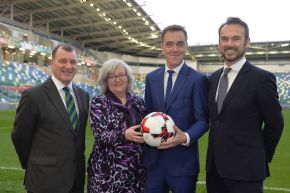 Ulster University and the Irish Football Association (IFA) have announced plans to create the island of Ireland’s first ever football coaching degree, which will inspire and shape the next generation of leaders within the multi-billion pound football industry.

With plans to start in September 2017, Ulster University’s BSc Hons Football Coaching and Business Management will be delivered on a part-time basis at the National Football Stadium at Windsor Park. The innovative degree will allow students to combine theory and practice with the completion of professional UEFA coaching qualifications along with an undergraduate degree.

The new Ulster University course will be delivered in four day intensive blocks, covering everything from football policy planning and operations management to performance analysis and coaching science.

Embedded within the course will be internships and work placements, giving students first-hand experience of the industry and access to some of Northern Ireland’s leading figures in football.

Executive Dean of Ulster University’s Faculty of Life and Health Sciences, Professor Carol Curran, added “In the UK alone the football industry is worth over six billion pounds, providing over 100,000 jobs. It offers hugely exciting career opportunities and this new Ulster University course will ensure a pipeline of highly-skilled graduates that will fuel the industry’s future success, both in the UK and further afield.”

Irish FA Chief Executive, Patrick Nelson, said: “The new National Football Stadium at Windsor Park is already a fantastic venue for spectators and I am delighted that with this innovative football degree it will now become a world-class venue for learning. Ulster University is renowned for its teaching and excellence in sport and I have no doubt that this course will be of huge benefit for those wanting to secure a successful career in the football industry.”