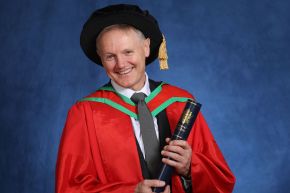 Josef ‘Joe’ Schmidt, the coach that led the Ireland rugby team to their first victory against the New Zealand All Blacks in 111 years, has been awarded an honorary degree by Ulster University for his distinguished services to sport.

With a renowned reputation as a leading university for sport on the island of Ireland, Ulster University conferred the Doctor of Science (DSc) on Joe during the Winter graduations held at the Millennium Forum, Derry.

The New Zealand-born rugby union coach and former teacher coached the New Zealand schoolboys during his teaching days before becoming full-time assistant coach at Bay of Plenty, Auckland Blues, Clermont Auvergne, and then head coach of Leinster. On the back of unprecedented success at Leinster, winning four trophies in three years, Joe was appointed Ireland head coach in 2013.