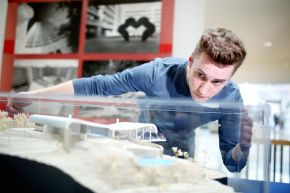 Ulster University students are being inspired by one of Australia's most prominent architects as the University becomes the next stop on a worldwide tour of an exhibition showcasing Harry Seidler's work.

Curated by Vladimir Belogovolovsky, founder of the Curatorial Project in New York, the Harry Seidler: Painting Toward Architecture exhibition will be hosted by Ulster University until 28 April. It will showcase artworks, models, photographs, sketchbooks and paintings, providing an insight into the multi-faceted and modern designs of the Australian architect who passed away in 2006.

Since October 2012, the exhibition has travelled to over a dozen cities worldwide including Barcelona, Madrid, Moscow, Rio de Janeiro and Sydney. Hosted in the foyer of Ulster University's Belfast campus, the exhibition is open to the public and free of charge.