Ulster University's Gaelic football team at the launch of the 2016 Sigerson Cup. 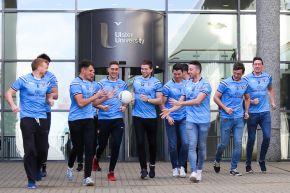 Ulster University's Gaelic football team at the launch of the 2016 Sigerson Cup.

Ulster University will be playing host to the Independent.ie Sigerson Cup 2016 at its world-class sporting facilities in Jordanstown on Friday 19 and Saturday 20 February.

The University will welcome 14 teams and over 500 players and coaches for the finals of the Gaelic football Irish intervarsity championships. The University has a long and proud association with the tournament, first entering in 1985, securing its first title in 1986 and with further successes in 1991, 2001, 2008. This will be the second time that the University will host the competition, with the first being in 1993. Ulster University held its launch of the Independent.ie Sigerson Cup this week, when Vice Chancellor, Professor Paddy Nixon announced initial plans for the tournament and highlighted the importance of sport in inspiring the next generation of leaders.