Support for creative industries essential to secure future of sector 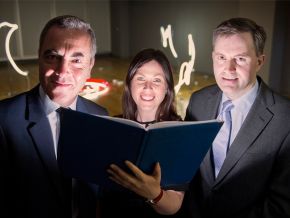 An Ulster University report into the creative industries in parts of Northern Ireland, the Republic of Ireland and Scotland, has identified gaps in support and capability within the film and broadcast sector that could impact on future growth.

The latest Honeycomb – Creative Works report, Framing the Future, complied by Ulster University and launched by its Chancellor, James Nesbitt, makes a series of recommendations on how the sector could be better supported and developed based on a detailed analysis of 87 companies. The Honeycomb – Creative Works initiative is managed by Ulster University and funded by the EU's INTERREG IVA programme.

The report found that film and broadcast companies based outside the greater Belfast area enjoy a significant cost advantage compared to the rest of the UK. The report suggests that a strategic development plan could maximise this potential and turn NI into a high quality, low cost internationally competitive film and broadcast centre.

However, levels of government support for companies were found to be lower across Northern Ireland than support offered to similar businesses in the border counties and west of Scotland.

The report highlights that Investment in new technology and skills development, particularly within the freelance part of the sector will help the industry to position itself more strongly on a regional basis. In addition, the report recommends that support also be provided to help develop business skills and start ups, reduce reliance on the domestic market and ensure that firms across NI can bid for their share of network production spend.

Dr Colm Murphy, Head of Film, Media and Journalism at Ulster University and co-author of the Framing your Future report said:

"The creative industries is one of our most successful and internationally respected sectors, however it is relatively small and suffers from under-investment in priority areas which could impact on its future growth.

"The majority of companies are small and almost 50 per cent rely on freelance skills to fulfil key contracts. Most have little additional time or resource to enhance core business management, international networking or technical skills that would strengthen the companies and the local economy.

"Our report has highlighted the challenges faced by the sector and identifies some actions which could position creative industries as a whole in Northern Ireland more competitively, not just locally but also in export markets."

The Honeycomb initiative is an EU funded programme managed by Ulster University. It focuses on developing the digital content sector across the INTERREG IVA region of Northern Ireland (excluding Belfast), the six border counties of the Republic of Ireland and the western seaboard of Scotland.