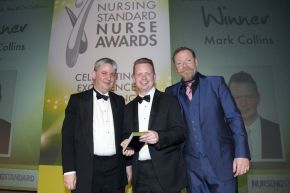 Mark was shortlisted for the prestigious national Nursing Awards after he developed an art therapy project during a six-week placement in the Western Health and Social Care Trust's acute mental health ward for over-65s at the Waterside Hospital. His project helped improve patient self-esteem and social skills using a 'Tree of Regrowth and Recovery' displaying patient artwork.

Finding few group activities for patients, Mark combined his art and nursing background to promote social interaction on the ward. He'd previously been an Art Studies student but switched to Mental Health Nursing after a relative took their own life and during his placement he recognised that he could combine skills from both academic disciplines to promote social interaction amongst patients.

"I used my art background to create something that would motivate the patients, allowing them to join in and socially interact," Mark explains. "I talked to the patients to see how they felt about it, ensuring it was a positive experience from the outset. The patients told me that the things that made them happy encompassed wildlife and nature so I used that as the project theme".

"It was an extremely positive experience – patients could talk about what made them happy rather than their mental illness."

Although Mark's placement has now finished, the project on the ward is ongoing as every patient has a different story and a different outlook on what keeps them positive.

Mark is now developing a business case to extend the concept and he intends to replicate the project where he can.

Professor Owen Barr, Head of the School of Nursing commented on Mark's innovative approach, adding: "His project demonstrates clearly how art based approaches can be a very positive and powerful part of the work of skilled nurses when supporting people with mental health issues. Mark's passion and innovation in developing this are evident. We're delighted his work has been nationally recognised in the annual nursing awards. It's a tremendous achievement for him and I expect that he will be in great demand by the nursing community when he graduates."