The Gray Matters smartphone app could hold the key to preventing the onset of Alzheimer’s disease. 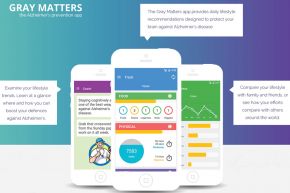 The Gray Matters smartphone app could hold the key to preventing the onset of Alzheimer’s disease.

A revolutionary new smartphone app, developed by scientists at Ulster University in collaboration with Utah State University in the US, could hold the key to preventing the onset of Alzheimer's disease.

Unveiled at the world's largest convention for Alzheimer's research in Washington DC, the Gray Matters smartphone app encourages individuals to set lifestyle goals, ranging from exercise and nutrition to stress management and brain stimulation - all of which are known to have an impact on the onset and progression of Alzheimer's disease.

The app provides daily facts on the link between healthy lifestyle behaviours and improved cognitive wellbeing. Through the app, users can track their lifestyle across a range of areas, including diet, physical activity, mental well-being and social engagement. It also provides visual progress reports to help individuals be more aware of their general health and encourage healthy behavioural change.

"Making positive adjustments to lifestyle can significantly reduce the risk of Alzheimer's disease and our research findings show that the Gray Matters app both educates and empowers users to make these changes. Ulster University is now working closely with Utah State University to identify partnerships to further enhance functionality and usage of the app before its launch to the general public."

Professor Maria Norton, from Utah State University's Family, Consumer and Human Development Department added: "The incidence of Alzheimer's disease is increasing worldwide. With no known cure, it is imperative that people understand modifiable risk factors for cognitive decline and take steps to protect their brain health in their younger years.

"The primary outcomes of the Gray Matters study are increases in intrinsic motivation for, and actual achieved changes in, health-related behaviors, with accompanying reductions in subjective memory complaints. Secondary outcomes of interest are physical and cognitive health indicators including body mass index, blood pressure, blood-based biomarkers, and cognitive test scores."

The research was unveiled at the Alzheimer's Association International Conference. It is being undertaken at Ulster University's Computer Science Research Institute and Utah State University's Center for Epidemiologic Studies. The Gray Matters app is currently being used for research purposes only with plans to make it available to the general public in the future.