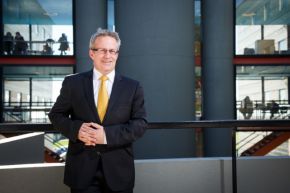 Ulster University has confirmed the appointment of Professor Paddy Nixon as its new Vice-Chancellor.

He succeeds Professor Sir Richard Barnett who retires on 31 March 2015 after a 9-year tenure leading the multi-campus university.

Professor Nixon will join Ulster University from the University of Tasmania where he is currently Deputy Vice-Chancellor (Research), responsible for driving the research agenda through both existing and newly formed research institutes. He has extensive industry and commercial experience, particularly in collaborations with global high tech firms.

"I am delighted to be appointed Vice-Chancellor of a multi-campus University that combines such strong local roots with impressive international reach.

"Ulster University is uniquely placed to innovate, create and collaborate in ways that support the most inspiring student experience while also influencing policy and practice through pioneering research. This success is built on strong engagement with the local communities in which it is based.

"I look forward to working with those external stakeholders, including the NI Executive, to ensure that our higher education sector in Northern Ireland continues to fulfil the ambitions of young people and contributes to economic growth.

"I also look forward to working with the governing body, staff and students in continuing to shape the vision that Ulster University has for learning and teaching, for world-class research outcomes, and for both local and global partnership development."

Professor Nixon was previously Science Foundation Ireland Research Professor in Distributed Systems at University College Dublin (UCD), where he was Vice Principal (Deputy Dean) of the Faculty of Engineering, Mathematics and Physical Sciences. From 2007 – 2010 he was Academic Director of INTEL's Independent Living and Digital Health, leading a team of 150 clinicians, researchers and engineers.

"The University has undertaken a rigorous process to find the right person to lead Ulster University into a new era. This is an exciting time in which to be given the opportunity to lead the team responsible for the development of a progressive, ambitious institution. Professor Paddy Nixon brings skill, perspective and leadership that will be invaluable to the University in this next exciting phase of its development."

"This is a dynamic appointment at an exciting time for Ulster University, its staff, students and partner organisations. I'm looking forward to welcoming Professor Nixon to the Ulster University family."

Professor Nixon is expected to take up post on 1 July 2015, relocating to Northern Ireland with his wife, Vanessa and two children.