A cosmic voyage at Ulster University

Ellie Beggs from Belfast High School getting to grips with a model of the solar system ahead of the event. 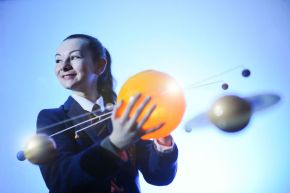 Ellie Beggs from Belfast High School getting to grips with a model of the solar system ahead of the event.

The next generation of scientists will get the opportunity to embark on a 3D exploration of the solar system during an upcoming series of events hosted by Ulster University and the Institution of Engineering and Technology (IET).

Using the latest 3D technology, the audience will be transported back in time to witness the beginning of the solar system and observe the moment the Sun burst into life. The audience will also take a virtual flight over the surface of Mars and find out how robotics and research is transforming our knowledge of the Red Planet.

Following the launch of Ulster University's groundbreaking research that has the potential to shape future manned missions to Mars, the University and IET will host the event at the Magee campus on 8 December and at the Jordanstown campus on 14 December. The events, which are open to the public and free of charge, are part of IET's annual lecture series that to is designed inspire, inform and influence the engineers of the future.